Those in the anthology who were originally published in my time were not part of Camerawork; they rarely, if ever, came through the door.

We didn't write editorials, we 'editorialised' in the balance and juxtaposition of the content. Studio International. It's curious that Jessica Evans, concerned to "recover an historical understanding" didn't bother to talk with three of the four remaining co-founders. Evans's remark implies that blissful awareness would have compelled us to opt for one consistent position - what kind of stultifying notion is that? Perhaps pornography exists in the processes of production and consumption of images rather than in the images themselves - as ever in large part arbitrary signifiers. Their gobbledygook became of interest only to themselves and the magazine folded. Out of context, are these essays are worth reading today? Jessica Evans writes: "I have tried above all to present an accessible but critical introduction to the twists and turns of the debates in recent British radical photography. Summary "Camerawork was the only UK magazine devoted to a critical and contextual study of photography as a social practice involving relations between the producer, the forms of distribution and the viewers and participants. Within a decade it had lost the plot, spiralling out of control in endless discoursing, analysing, theorising and criticising - to the point of paralysis. She writes: "The tone of Camerawork, even within the same issue, oscillated between hard-line Marxism, humanist individualism, and the rhetoric of the s counterculture - often with blissful unawareness. The inclusion of the editor's own essay on Spence's later career is inappropriate; much more useful would have been research into the genesis of the magazine to have enabled a balanced treatment of Spence's contribution to it. Mass Observation: The Intellectual Climate by David Mellor, explores a curious thirties documentary project: public opinion polls, upper class spies and candid photography involving many leading London intellectuals endorsed by Professor Bronislaw Malinowski.

Peter Marshall The Camerawork Essays Abbreviated excerpts from a forthcoming review - the first half of which covers similar ground to the article by Paul Trevor and was thus been omitted - which accounts for the references starting at 4 A later full version of this review is now available.

Camerawork was lively, visual, user-friendly, polemical. It was nameless until the very last moment.

Essay on autobiography of a camera

It marginalises photographs both literally and conceptually. John Berger writes well, but wrote this piece better as 'Uses of Photography' in his widely read 'About Looking' 4 filling in some 'missing links' in his thoughts and clarifying the relationship of his ideas to Sontag's On Photography 5. The expression isn't used in the book. The Camerawork Essays is dry, didactic, specialist, pretentious. The cultural climate had changed in the s - says Evans and "there was an emerging rapprochement between the culture of critique and the culture that constituted the object of that critique. Victor Burgin's 'Art, Common Sense and Photography', a plain English translation of his article 'Photographic Theory and Art Practice' 6 represented a major triumph for the editorial team. The effect of these texts is to distance the essays even further from their original context - the dynamic of the magazine - and subject them and us! Within a decade it had lost the plot, spiralling out of control in endless discoursing, analysing, theorising and criticising - to the point of paralysis. The book represents only a narrow strand of Camerawork's legacy. Her interview with Stuart Hall adds his name to the book cover. Since then she sees 'a movement back into the conservative worlds of fashion photography in the service of titillating illusion where the body is again the centre for male appropriation, and the elitist formulae of formalism in the art galleries. And Spence's own essay 'The Politics of Photography' which launched the magazine is unforgivably omitted! Other information Includes bibliographical references and index. Photographs were central - its A3 format specifically designed for their effective use in single and double page spreads. A third section examined how computer, video and audio technologies might be changing the concept of representation.

The essays are by academic careerists and professional writers. If anyone out there is interested I may be able to help. Each of the essays is given its own new 'context', a mini-introduction, usually by the original author, offering hindsight thoughts on the significance of the piece. 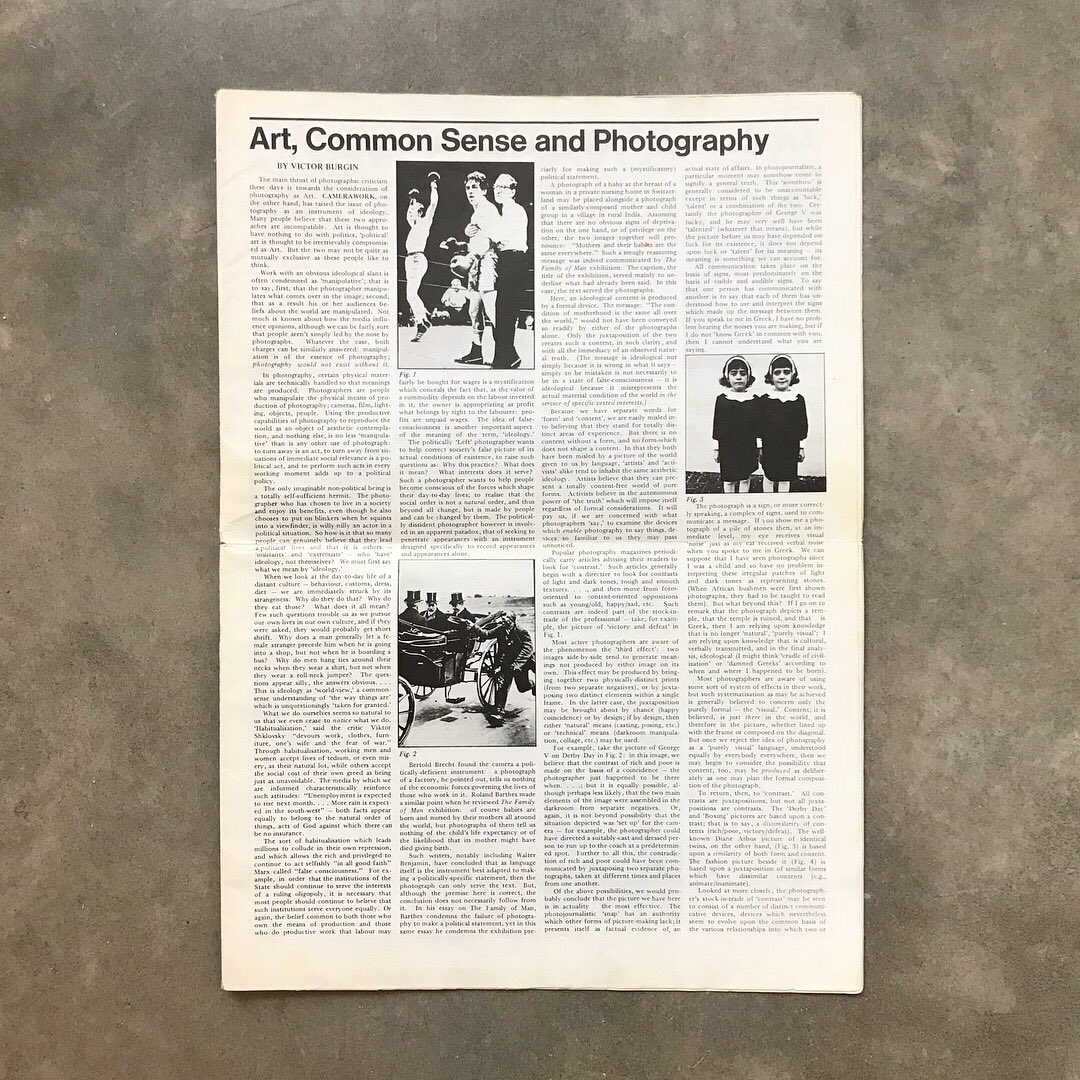 But Evans detects a problem of 'editorial coherency' from the start. This dry, obfuscating book fails abysmally to bring any of this out, or any of the fun, anger, excitement, passion, exhaustion, turbulence, generosity, energy and creativity we experienced. It's as an insider that I've been asked to comment, based on my experience.

Theory and analysis played a useful but small part. Overall, as Paul Trevor aptly states in his contribution above, this 'is an exercise in that 90s phenomenon - repackaging. That was never our intention. Jessica Evans's text would have failed the test. I welcome and endorse the tributes paid to Jo Spence, who was an inspirational colleague. The cultural climate had changed in the s - says Evans and "there was an emerging rapprochement between the culture of critique and the culture that constituted the object of that critique. Splendidly clear and informative, it cruelly lacks most of its original illustrations by Humphrey Spender. The essays are by academic careerists and professional writers. John Tagg's attack on that sitting duck The Photography Year Book, ; is, as he says, 'out-dated stuff'.

What you don't learn from this book is that Camerawork was our baby, we decided how it would grow, the direction it would take.

Rated 8/10 based on 48 review
Download
Peter Marshall: The Camerawork Essays